Wasco Lake is a beautiful, blue alpine lake located near Three Fingered Jack in the Mt Jefferson Wilderness. Because the lake is accessed from the Jack Lake Trailhead, you may encounter a parking area overflowing with vehicles, but most all those people are heading up to Canyon Creek Meadows and you could still have to lakes virtually to yourself. Most of the hike was devastated by the 2003 B&B fire, so don’t expect to find a lot of shade. The area is recovering however, and the flowers and brush growing through the skeletons of the forest is beautiful in its own right.

The trail to Wasco and Minto Lakes begins by first passing by Jack Lake. The pretty little lake has numerous spots to get right down to the water if you want to let your dog take a quick dip or if you want to soak your feet on the way back. After the trail circles the eastern shore of Jack Lake, it begins climbing the ridge behind it. In just 0.4 miles, you will reach the junction with the Canyon Creek Meadows Loop. The arrow will direct you around the loop to the left. You don’t want to take that loop though, so go against the grain and head to the right.

The trail remains fairly level over the next mile and it winds through burned timber and through a blessedly unburned island, giving you some of the only shade on the trail. Views of Three Fingered Jack and Mt Jefferson pop up from time to time. Soon, you will start to hear the roar of Canyon Creek as you approach the trail junction to Wasco Lake. Look off to you right just before the junction to see a pretty little waterfall.

Just past the waterfall, you will reach the intersection with the old Skyline Trail. This trail will head over Canyon Creek, but there are numerous large rocks placed across the stream, making rock hopping easy. It’s a gradual downhill for the next half mile as you make your way to Wasco Lake. You will see a couple little ponds peeking through the trees as you approach the lake, but you won’t mistake any for Wasco Lake. Wasco Lake itself is a beautiful deep blue, and is pretty big, by alpine lake standards.

Once you reach the southern shore, if Wasco Lake is your final destination, don’t just stop there. The trail continues along western edge of the lake and as it rounds the northern shore, there are some nice camping areas along with good places to access the water. There is also trees and shade. It makes a great place to stop and relax. Just be forewarned that once you reach the lake, you will likely encounter a fair number of downed trees to climb over along the trail.

If you wish to keep going and want to hike the loop to Minto Lake, look for the trail junction for the Minto Pass Tie Trail. This trail climbs the ridge behind Wasco Lake, steeply climbing Minto Pass to the PCT. While this trail is fairly steep it isn’t too bad and its not for very long. In a little less than 0.2 miles and 200 feet of climbing, you will reach the junction with the Pacific Crest Trail. Make a right on the PCT and continue climbing, although less steeply, for the next half mile. One nice feature of the PCT is there are much fewer trees to clamber over than along the Skyline Trail. There are also some views of Three Fingered Jack over some meadows through the trees along the way. Just be sure to turn around to see them.

After rounding the rocky knoll along the PCT, you will again reach a junction with the old Skyline Trail. Make a right and start heading back down the ridge. Once again, prepare yourself for scrambling over trees that have fallen across the trail. In another half mile, you will find yourself rounding little Minto Lake. There isn’t really any good access down to Minto Lake from the trail, but you can clamber over some logs and through some brush to reach it without too much effort. There are some nice, grassy areas to relax on the northeastern shore if you choose.

Following Minto Lake, the trail rounds the ridge between Wasco and Minto Lakes and offers some of the best views of the hike. As you round the ridge, much of the burned trees in this area have burned down, leaving you with a beautiful view of Three Fingered Jack looming over the Wasco Lake. It is only 0.5 miles from Minto Lake back to Wasco, and then you will rejoin the trail you came in on. Continue around Wasco Lake and head back towards Jack Lake.

To reach Jack Lake trailhead, take Highway 20 north from Sisters for about 12 miles. Turn right onto Forest Road 12, just before the highway makes a sharp turn to the left and heads past Suttle Lake. Stay on 12, which remains paved, for about 4 miles, until you see a sign for Jack Creek. Head to the left, on Road 1230, which will quickly head over a bridge and then turns to gravel. The paved section of the road is almost worse than the gravel, with giant potholes everyhwere, so keep your eyes open and drive slow. After crossing over Jack Creek, the road turns to gravel and is 7 steep, washboardy miles until you reach the trailhead, but most vehicles should be able to make it if you take it easy.

Usage: Light - but heavy use at trailhead and beginning of trail.

Open Season: The trail will be mostly snowfree in June and will reamin so through Novemeber, most years.

Bugs: Mosquitos can be bad during the melt season, usually through early August, then will mostly clear up moving forward. 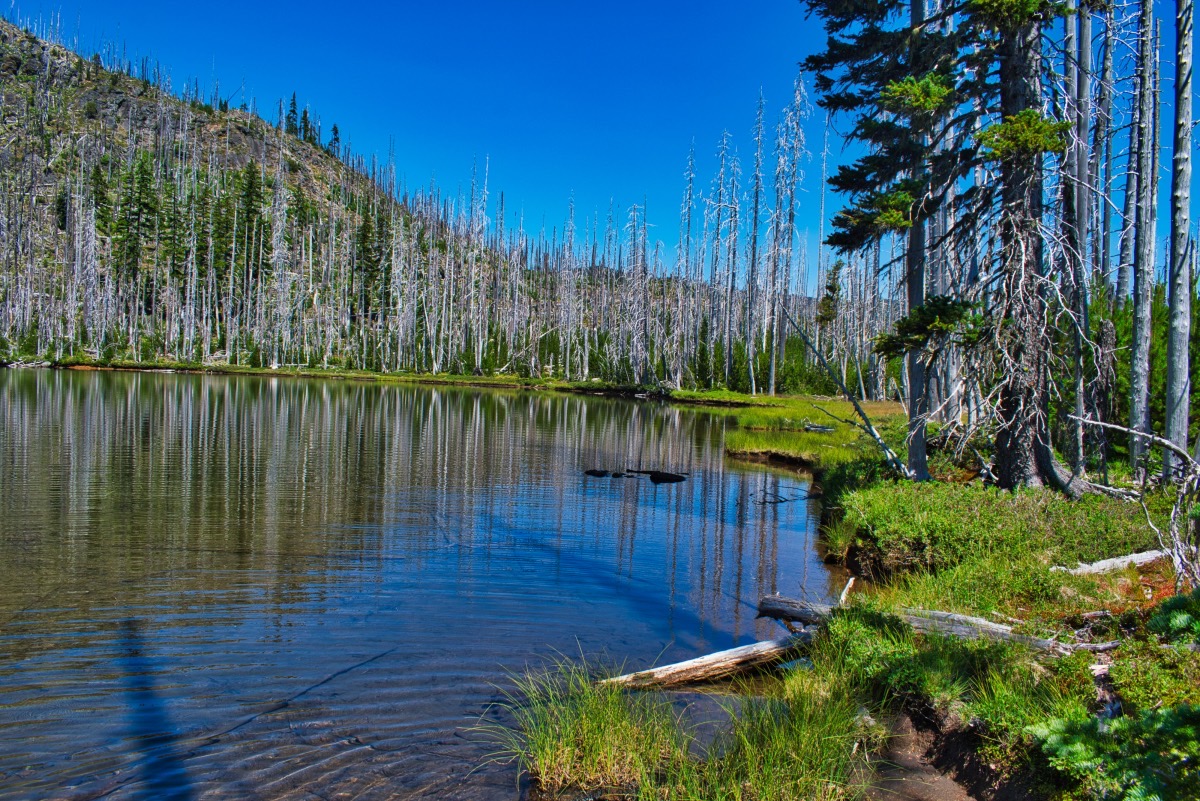 Wasco Lake
❮ ❯
Tell us about your experience.
Leave a comment here