Paulina Falls is a beautiful, side by side waterfall that drops 80 feet and is the only outlet of the Newberry Caldera. There’s something magical about visiting a waterfall in the wintertime, with icicles hanging down everywhere and the creek weaving its way through snow covered boulders. And Paulina Falls is yet another stunning example of winter accessible waterfalls in Central Oregon if you are willing to work a little for it.

Your snowshoe adventure begins at Ten Mile Sno-Park, on the flanks of Newberry Volcano, ten miles from Highway 97, coincidently enough. Newberry volcano is a shield volcano that covers over 1,200 square miles, making it the largest volcano in the Cascades. It’s shield shape, however, makes it appear more as a long ridge rather the steep sided stratocones common to the west. The majority of eruptions occurring on Newberry consisted of a more fluid lava, like those found in Hawaii, slowly building the volcano in layers. A more violent eruption did occur about 75,000 years ago, creating the Caldera containing both East and Paulina Lakes.

Head out of the north end of the parking area, towards the toilet and warming hut. Things can be a little confusing at first because it appears that snowmobile trails run everywhere and the actual snowshoe trail isn’t well marked. Straight north of the warming hut, you will see a trail heading up a hill to the north. Take that trail. It’s the way. If you don’t, you will go the wrong way. Who knows where you will end up. So take that trail.

The majority of the trail climbs slowly uphill towards the falls. The route is fairly popular, so there are usually tracks to follow and the blue diamonds are generally fairly evident. At about 0.6 miles, you will cross a snowmobile route that follows underneath some powerlines. Look for your trail on the far side of the road, but also watch for snowmobiles as you cross. They can be pretty quick.

Once across, you will continue through the forest for another 0.3 miles. Here you reach the rim of the Paulina Creek canyon. Generally, you won’t know that though, because the trees are pretty thick. So just continue marching along the edge of the canyon for 1.4 more miles. Here, you will pop back out on that powerline road. There may be a little section of trail on the other side of the road again that you can take if you want to stay off the road, but it is only a tenth of a mile to the parking area for the falls, so I like to just follow the road up.

The trail stays to the north of the parking area and then begins to curve north towards the Pauline Falls. In less than a tenth of a mile, you will be standing on a nice overlook, gazing out at the frozen wonderland. If you would like to, you can continue up the trail for another half a mile. That will take you to the shores of Paulina Lake and the Paulina Lake Lodge, where you can grab a beer, have some lunch, and watch the game if you so desire. Just remember that it gets dark early and you’ve got a ways to go to get back. Unless you want to ride butts to nuts with a snowmobiler. But that’s your call buddy.

To reach the Ten Mile Sno-Park, head 23 miles south of Bend on Highway 97. Make a left onto Paulina-East Lake Road, about 6 miles north of La Pine. The Sno-Park will be 10 miles up this road on the left.

Passes: An Oregon Sno-Park permit is required November 1 through April 30.

Open Season: There is usually ample snow to snowshoe here from mid-December through mid-March. 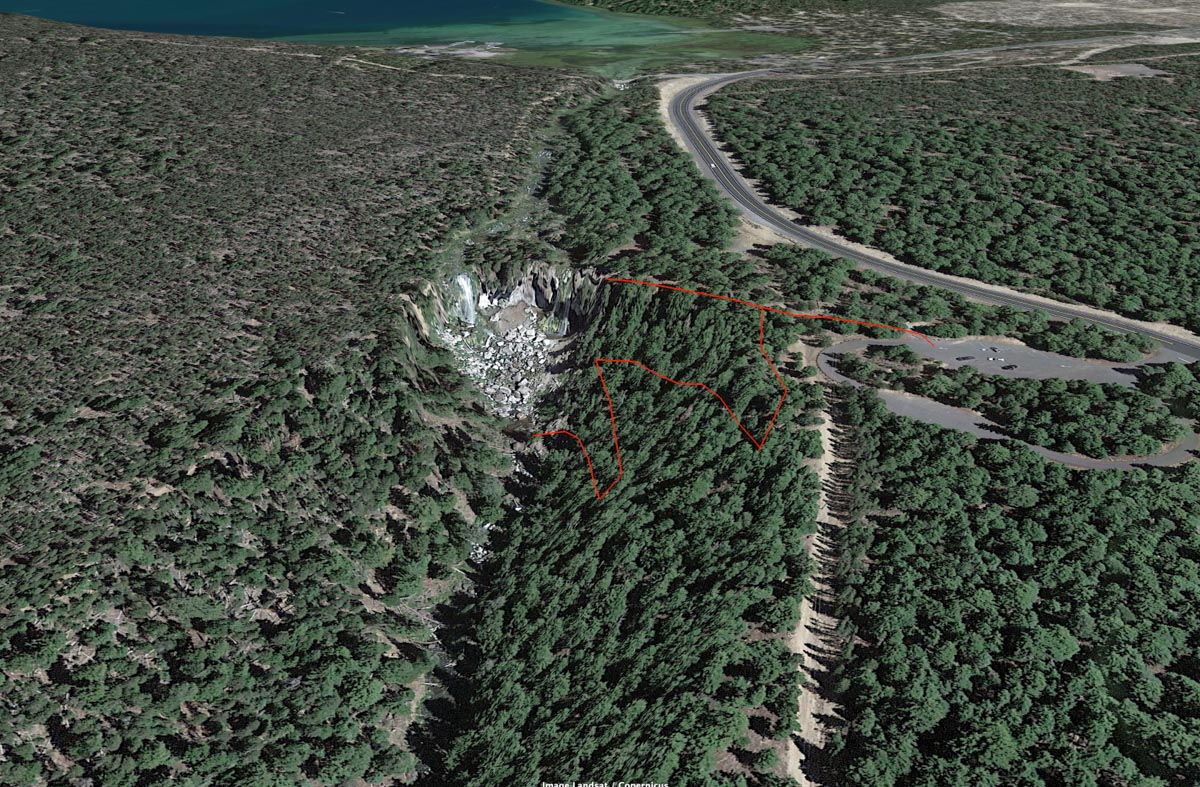 The trail continues above the falls for another half mile along the creek.
10 / 11

Paulina Peak
❮ ❯
Tell us about your experience.
Leave a comment here