Crater Lake National Park’s website says it best, Crater Lake inspires awe. And while the trek to Vidae Falls along the East Rim Road won’t nab you any views of the famous lake, it still grants you the opportunity to snowshoe through some old growth forest on the side of a volcano on your way to a frozen waterfall. Just as a forewarning though, depending on the year, the falls can either be a 100-foot-tall tower of cascading ice, or completely buried in snow. Our trip granted up the later. The final picture in the gallery was all you could see of the falls on our expedition, I tiny little trickle that just barely popped out of the snow. I image early in the year, when the snow isn’t as deep but it has been cold for a while might be the best time to visit.

Crater Lake was formed 7,700 year ago when Mt Mazma collapsed following a major eruption. The layer of pumice and ash it deposited across Oregon is easily recognizable and can be feet thick in places. In the wake the eruption, a huge crater was left. Slowly, over course of about 250 years, rain and snow which accumulated in the caldera filled the crater to present day levels. There are no streams that flow in or out of the lake, as it is completely fed by precipitation. Today, this lake is the deepest in the US at 1,943 feet deep. The water of the lake is also some of the purest, resulting in a dazzling blue color.

Begin your trek from the parking area at the snowed off East Rim Drive, near the Steel Visitor Center. Head southeast out of the parking area down a small hill. The route follows the road the whole way, keeping climbs gradual but sometimes long. After slowly heading downhill for a little less than half a mile, you begin a long steady climb as the road heads around the south side of Garfield and Applegate Peaks. You feel like you are climbing forever, but it is only for a mile and half or so. But you will gain about 400 feet in that time.

After the climb, you will begin a slow but steady decent as you make your way towards Vidae Ridge and the falls. In about half a mile, the road will start making a sweeping turn to the left as it rounds and then begins traversing Vidae Ridge. This is a known avalanche zone so be careful if conditions are unstable. If you would like there is a bypass trail that avoids the danger area. Look for signs marking the avalanche bypass trail right near the apex of the turn. If you take it, the trail will return you to the road just past Vidae Falls.

Continue snowshoeing down the road as you descend another 200 feet until you reach the falls. Hopefully you will have better luck than un and be able to see it. Listen for a trickle. If you are dying to see Crater Lake and are still feeling spry, the Sun Notch is 1.5 miles and 500 feet higher further ahead. If not, turn around and head on back. Lucky you, you get to climb almost as much heading back as you did to get here.

To snowshoe in Crater Lake National Park in the winter, you have to head through the South Entrance, as the north is closed during the winter months. Head south on Highway 97 109 miles from Bend until you reach Chiloquin. Take exit 247 onto the Chiloquin Highway towards Crater Lake. After 3 miles, make another right onto OR-62, the Crater Lake Highway. Stay on 62 for 24 miles, through Fort Klamath, until you reach the Munson Valley Road. Head right and in 4 miles you will find yourself at the parking area for East Rim Drive.

Passes: Between November 1st and May 21st, $15 will admit one vehcile into the park for 7 days.

Dogs: Are not allowed outside of the parking area at the Rim Village

Open Season: All year round, but the snow goes away at some point.

Hazards: The east face of Vidae Ridge has high avalanche danger, so avoid it during high risk times. 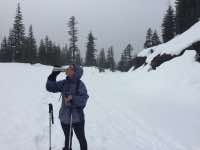 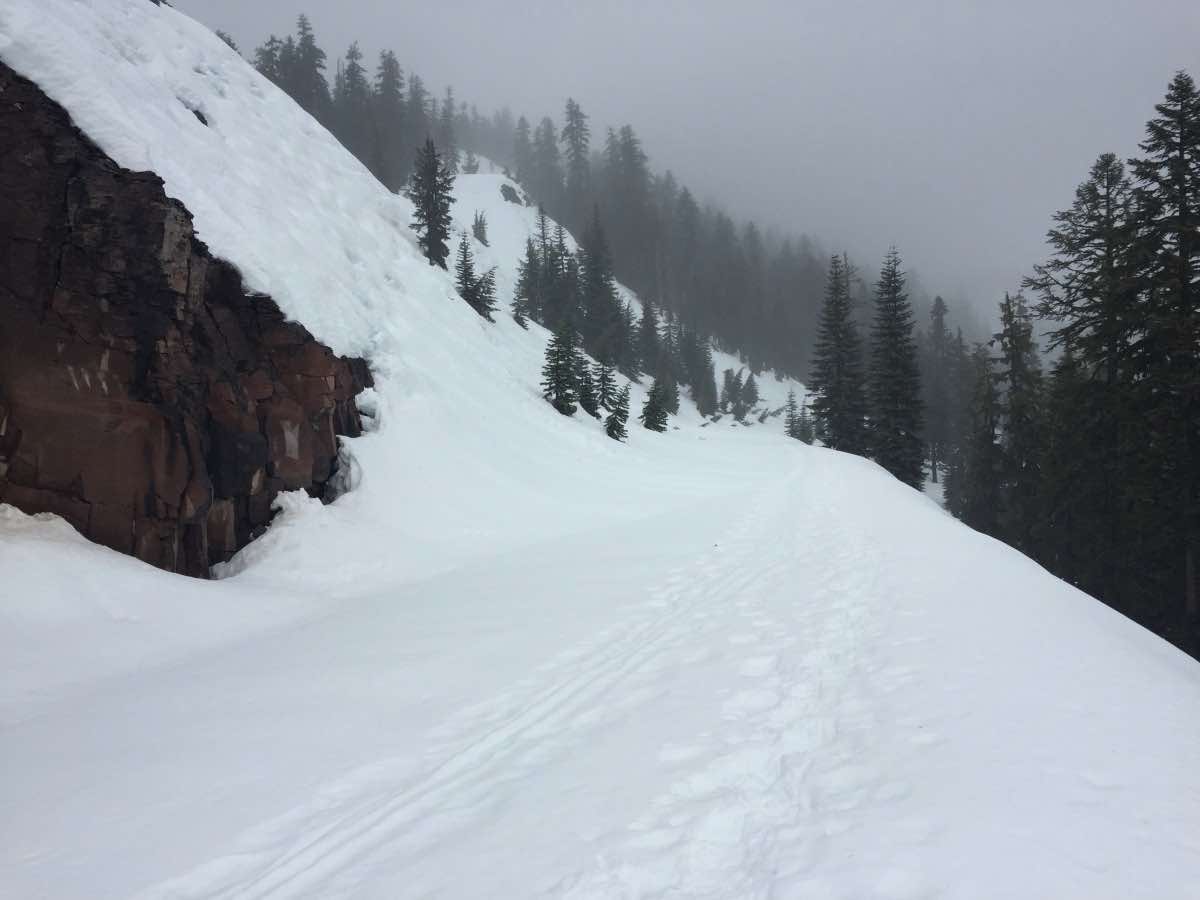 Traveling through the avalanche danger zone.
5 / 6

Vidae Falls is up there in those rocks. I swear. Its kind of buried.
❮ ❯
Tell us about your experience.
Leave a comment here