Blue Basin is the highlight of the John Day Fossil Beds Sheep Rock Unit, and visiting it is your chance to hike in one of the most unique places in Oregon. This area of Oregon has changed dramatically over the last 50 million years or so, transitioning from a lush subtropical paradise of nut and fruit trees, to hardwood forest of deciduous trees and finally to the sagebrush steppe and grasslands we see today. But it was event of 7 million year ago, when a volcano near Burns erupted covering 13,000 square miles with hot ash gas, which formed alien landscape we see today.

The hike begins from a parking area located just off of Highway 19 between Dayville and Kimberly. There are actually two trails that travel through Blue Basin, but they can be easily combined for a very enjoyable hike. You can head either way around the loop, but I chose to go right first, so that we could do the spur up the Island in Time trail at the beginning when we are fresh, rather than at the end when legs could be tired and adding 0.8 miles may not be worth it.

The trail begins heading up a draw that drains out of the blue basin. If it is a wetter time of year, the small stream may be flowing with some thick looking, green-blue water. It’s only a quarter of a mile until you reach the junction with the Island in Time Trail. It is definably worth taking this side trail as it takes you into the heart of Blue Basin.

The Island in Time trail heads straight up the draw and the rock surrounding you keeps getting cooler and cooler. The blue color comes from the chemical weathering of a mineral called celadonite which was found in the volcanic ash. And hopefully you enjoy bridges because you will be passing over about 12 of them as you wind your way up the valley. There are some kiosks describing what you are seeing as you hike, along with some displays of some fossils that have been found in the area.

You will reach the end of the trail before you know it. Marvel in your surroundings prepare yourself for a pretty serious climb. Head back out over all those bridges until you reach the intersection with the Blue Basin Overlook Trail, and start your upward march. This trail zigzags up the hillside to the south of the basin and the trail begins its loop around the area. You will climb about 500 feet in the next half a mile, but the views will just keep getting cooler and cooler.

As the trail works its way across a draw that drains into Blue Basin from the south, you will be through the worst of the climbing. There is still some to do, but it won’t be nearly as steep. The trail will travers along the hillside, just above Blue Basin as it winds its way toward the overlook. At about the 2.5 mile mark, and the top of the hike, you will reach an intersection with a small side trail. Head down that to get an amazing view of the basin rom looking down the back wall of the area.

Leaving the viewpoint will then take you down a steep draw and around the backside of the basin. It is a nice, steady decline for the remainder of the hike. Areas of blue-green claystone are also visible as you head down the valley to make the final push every bit as enjoyable as the beginning, without all the climbing.

Blue Basin can be found in the middle of nowhere, unless you live in John Day, then it’s not too far from home. From wherever you are coming form, you want to end up on Highway 19 between Dayville and Kimberly. The trailhead is easy to find. Just look for the signs directing you to it on the east side of the road, 5 miles north of the intersection with Highway 26 at Picture Gorge, or 13 miles south of Kimberly.

Dogs: Dogs are allowed and must be kept on a 6' or shorter leash

Open Season: The trails are open year round, the Blue Basin Overlook trail may in impassable during wet conditions. The clay of the area can get very slick when it is wet, and the trail is very steep in places, with some steep drop-offs off the side, making for the potential of a bad day. 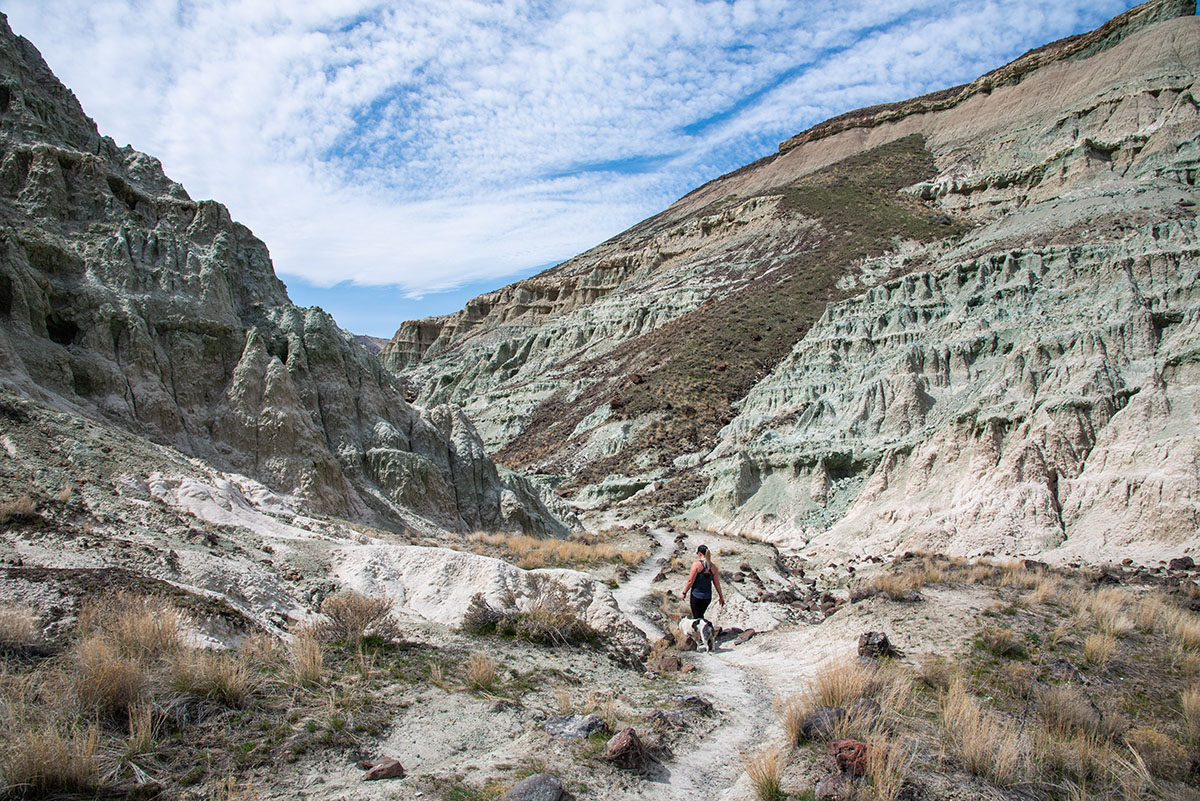 Enjoying the view from the Blue Basin Overlook
11 / 14

❮ ❯
Tell us about your experience.
Leave a comment here