Port Orford Heads State Park was once the site of one of the first lifeboat stations in Oregon. Now, it is a state park with an easy trail to some of the most amazing views on the Oregon Coast. The dramatic cliffs, sea stacks, and even Caribbean-like turquoise water all await you along this magical trail.

The Port Orford Heads were originally the site of a US Coast Guard lifeboat station, operating between 1934 and 1970. Here, guard surfman, as they were called, watched over the coastline stretching from Cape Blanco to the north and Cape Sebastian to the south. They would keep an eye out from the top of a 37-foot-high lookout tower, once located at the southern point of the head. If they found a hip in distress, run down a 280-foot tall staircase to a boathouse in Nellies Cove where they could launch out into the stormy sea.

Begin your hike in the parking area, where you can also visit other attractions dating back to this areas time as a lifeboat station. The old crew quarters have been turned into a museum and the perk residence was once the Officer-in-Charge Quarters. Look for a trail heading out of the south end of the parking area. The trail will travel through a dense, old growth forest. You will reach a trail junction quickly, where you will want to make a right and heads towards the west and the Pacific Ocean.

The trail will then begin descending through the trees until it intersects with the Headlands Trail. Make another right and begin working your way out to the northern point of the headlands. The trees are small and windblown and it is easy to see over the scrubby brush, so the views really open up along the section of trail. It’s only 0.2 miles until the back end of the trail, and the views are spectacular. You can see the lighthouse on Cape Blanco flash as the mirror turns and the waves will crash on some rocky cliffs below you. You may even see a seal or two or whales migrating through.

Once your eyes are full, head back the way you came, only this time, head straight on the Headland Trail at the last rail Junction. You will weave your way over a hill or two and across a couple draws as you head south. The Pacific is always just to your right offering some amazing views. Soon, you will hit the Tower Trail. Head right again continue down to the old lookout site. There are also some more nice views of the coves below you from here.

After reading an informative kiosk or two, turn around and you should see a second trail heading off just to the right of the trail you headed in on. Follow that as it enters into a tunnel of trees. As you see glimpses of the ocean below you through the thick trees, you may start to notice that it is taking on a beautiful turquoise color.

About a quarter mile from the lookout site, you will come to a nice viewpoint of Nellies Cove below. This is where the lifeboats were launched from during rescue operations, and the old sea wall which helped protect those launches is still present. Seals and Sea Lions like to bask on the rocks as well. Following the cove, the trail continues back up towards the parking area. Be sure to stop by and check out one of the old, wooden lifeboats that has been preserved up by the parking area.

In Port Orford, head west on 9th St at the sings directing you to the State Park. Make a left onto Coast Guard Hill Road after 0.1 miles and continue along it for 0.7 miles until you reach the park.

Dogs: Dogs are allowd but must be on leash.

Open Season: The state park is open and accessible year round. 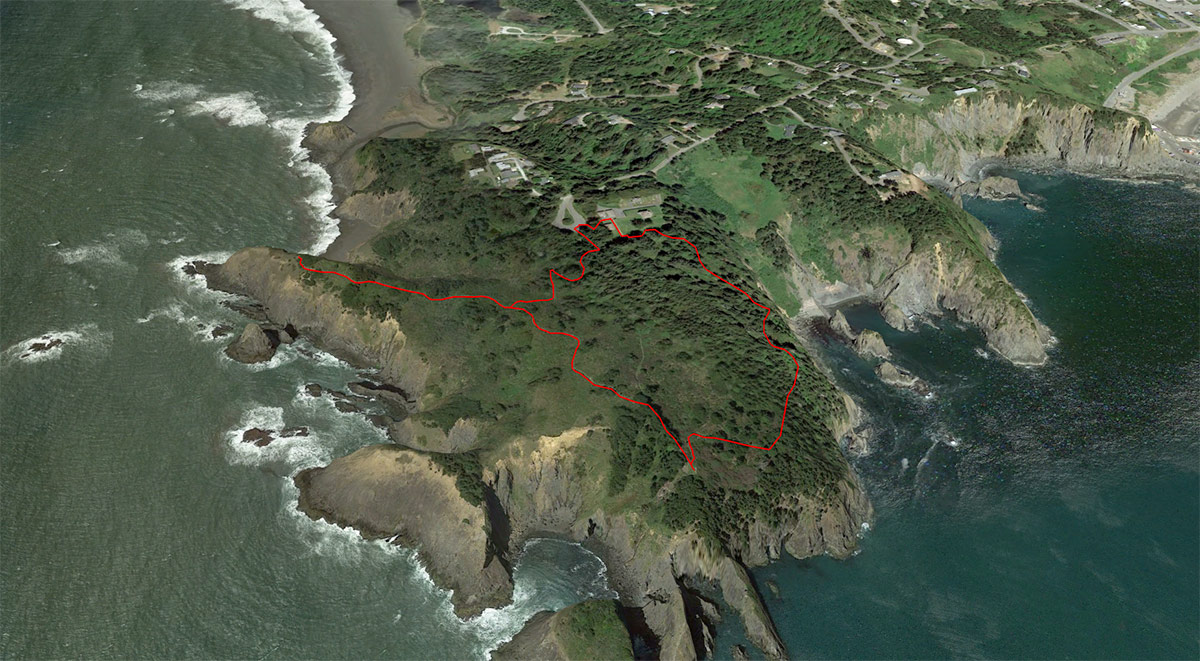 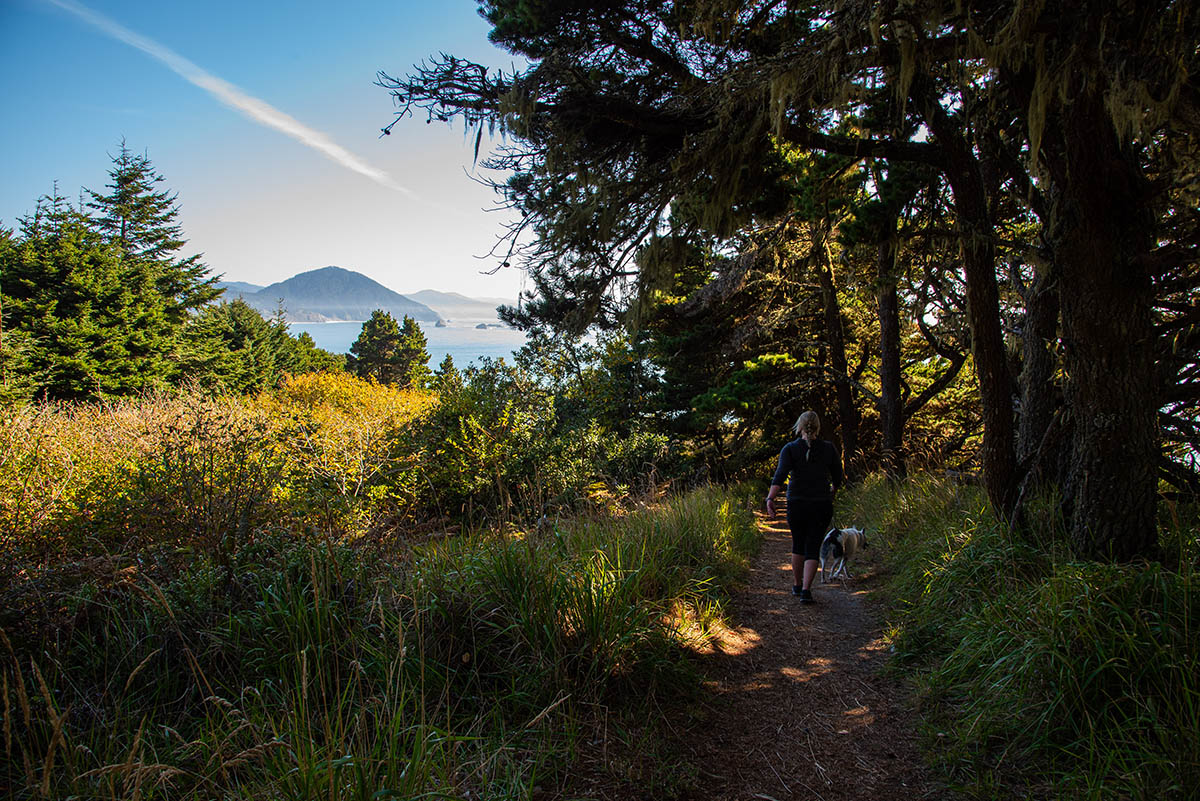 Humbug Mountain rises to the south.
6 / 9 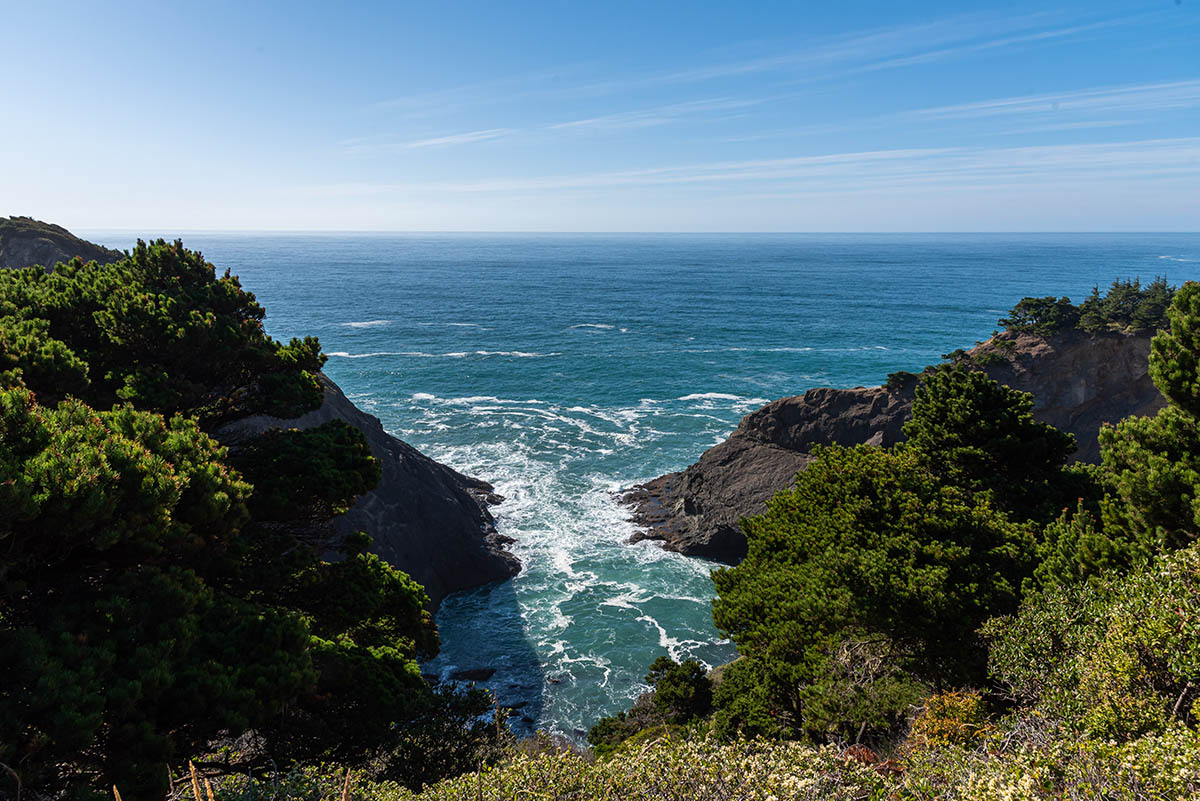 Cove to the west of the old Lookout Tower
7 / 9 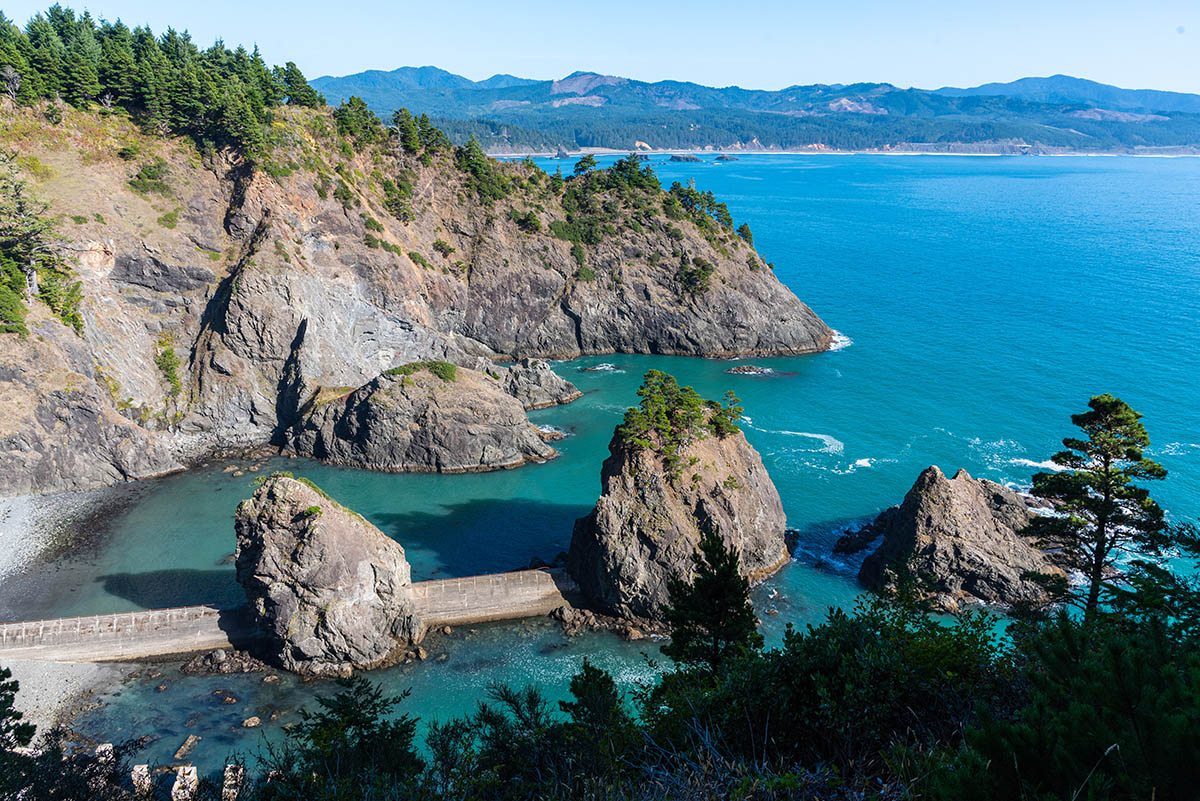 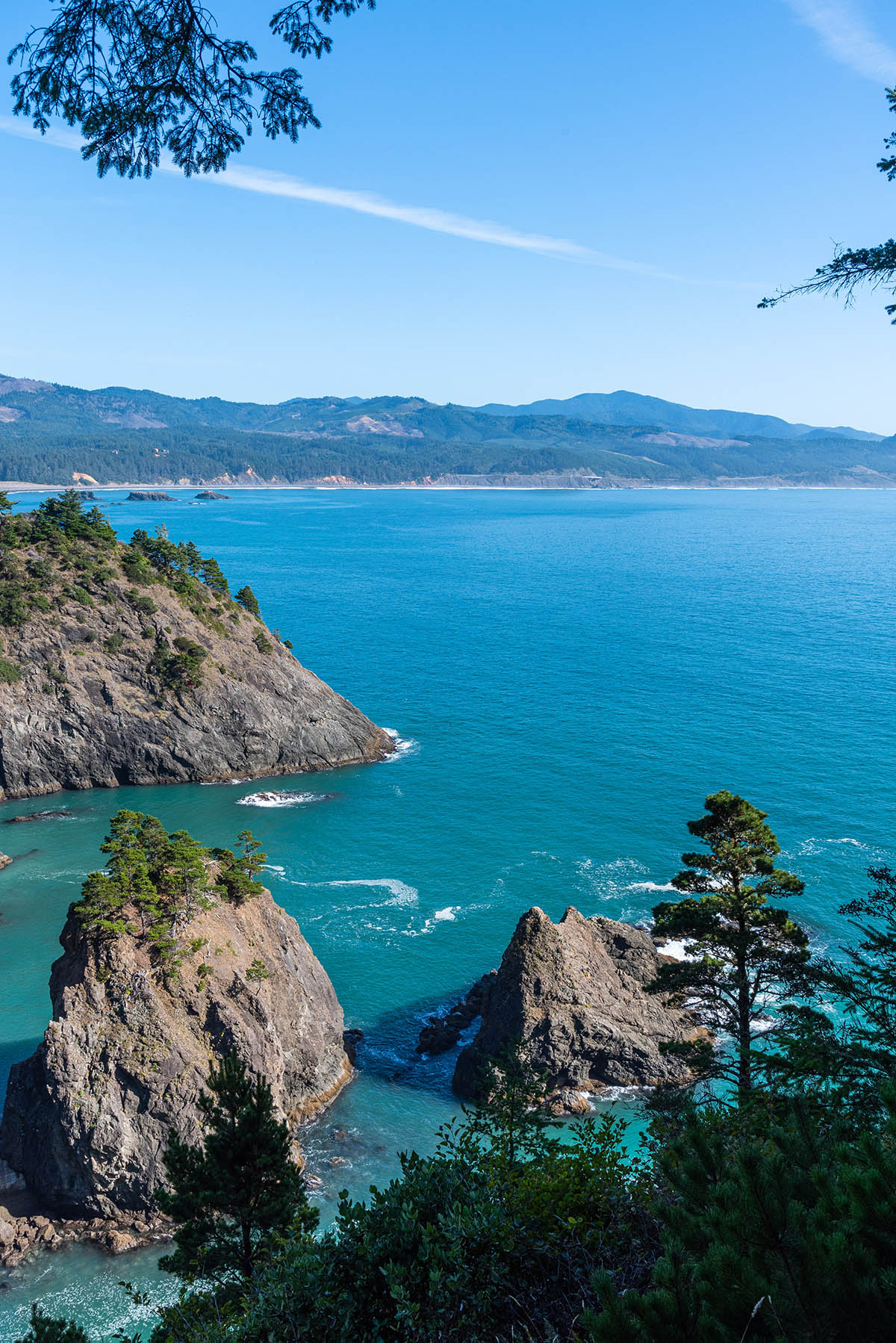 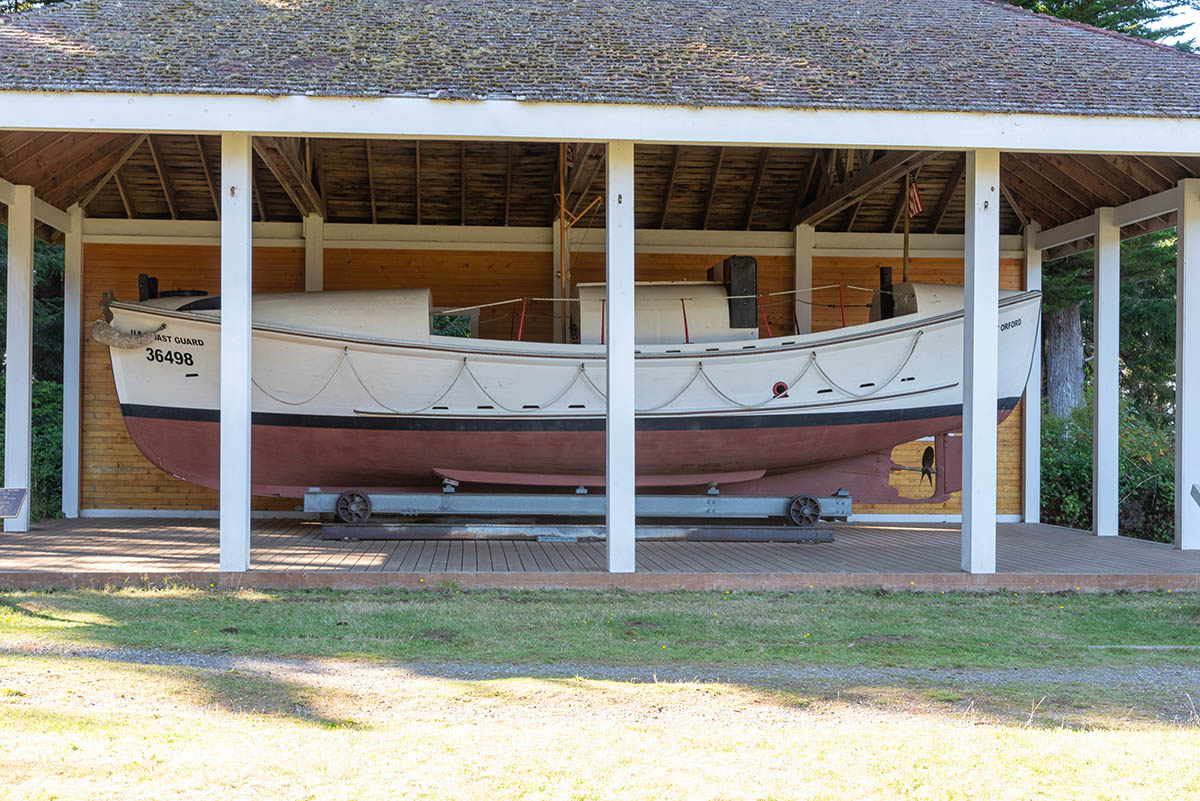