Climbing South Sister is a rite of passage for many Central Oregon outdoor enthusiasts. At 10,363 feet, South Sister (also known as Charity) is the third highest mountain in Oregon and the tallest of the Three Sisters. It is the youngest of the three as well. The last episodes of mountain forming eruptions occurred only 27,000 years ago, with some other eruptions occurring as recently as 2,200 years ago. While South Sister is a nontechnical ascent and one of the easier major summits in Oregon to climb, it still sucks. So girdle those loins and prepare yourself for the trip of a lifetime.

Even though the South Sister climb in nontechnical, with a trail all the way to the summit, this is still a strenuous endeavor occurring in a high alpine environment. The weather can turn quickly on you and if you are above tree line, sometimes you barely see because everything is whitish gray and it is easy to get disoriented and lost. You are walking on what is essentially a giant pile of cinders so slips, falls, and exhaustion can all play its part. Be as prepared as you can be, and this can be one of the most memorable adventures of your life.

The hike begins from the Devils Lake trailhead just past Mt Bachelor and it doesn’t mess around for long. After you cross over the highway, the trail quickly begins to climb through a forest of thick hemlock. This valley ascends 1,500 feet in about a mile and a half, just to get your legs warmed up for the main event. You will know you are about halfway up when see a giant boulder laying in the middle of the draw with many decades worth of graffiti/carvings covering it. As you near the end of the valley, you will climb a couple of switchbacks as you ascend out of the headwall of the canyon onto the flats at the base of the mountain.

Once you pass out of the canyon, you get for first good view of South Sister, and it is impressive. You can see the trail winding its way up the slopes. Make note of the moraine at the bottom of Lewis Glacier as well. When you are climbing, you’re going to start hoping that the moraine is the summit, cause you won’t be able to is anything past it. It’s not. It’s not even close. Don’t let it crush your spirits.

The plains stretch for about a mile and half as you work your way to the mountain. Moraine Lake glistens in a bowl beneath you and Broken Top can be seen poking over the ridgeline as you make your approach. Finally, you will reach the mountain itself and the trail will gently begin climbing. But not for long. It quickly picks up steepness as you ascend. The stretch as you climb the moraine itself is one of the steepest portions of the climb. The trail seems to branch out everywhere as it enters a sea of boulders. Try and pick the easiest path through and be wary of loose rocks. Many people have been injurred having one of these larger examples roll when they are climbing over it.

Once you top the moraine, the summit of the mountain comes back into view and the final push is laid out before you. A small lake at the base of crevassed Lewis Glacier shimmers below, but your gaze will be transported upward, realizing how much more work you still have to do. So, get on it. It is only about one more mile to the south side of the summit crater. One little mile and 1,400 feet. On crap. I think crap may be easier to walk on. The summit push of the hike is entirely on loose junk which tries to slide you back down as much as you move forward. Try and stay in the beat down portions of the trail as much as possible as that will minimize the sliding somewhat. It’s just a slow and steady slog the rest of the way, almost more of a test of your mental fortitude than your physical prowess.

Finally, you will crest over the top of the summit crater. From here, even though you may feel like you’ve accomplished the feat and don’t want to go to the true summit on the north side of the crater, pull up your big girl/boy panties and get moving. The view of Middle and North Sister from the north side of the crater is one of the most amazing you will ever find. It’s only about ½ a mile more, with a little climb at the end, but you can do it!

Heading down the mountain can almost be as hard as climbing, so be sure to give yourself enough time and leave yourself with enough energy. The ground is loose and steep and you will be tired, so be careful. The top section where it is really loose is almost easier than the bottom, as you can scree ski down a lot of it. Once below the moraine, it feels like a lot of the ground is covered in small marbles, just begging to take your legs out from under you. So, take it easy, make it back to your vehicle without the need for a rescue helicopter, and revel in your accomplishments.

To reach the Devil’s Lake trailhead, head south on Century Drive in Bend towards Mt Bachelor. Remain on the highway past the mountain for about 7 miles until you reach the brilliant turquoise water of Devil’s Lake. The parking area is just past the lake on the left side of the road.

Passes:A Central Cascades Wilderness Permit is required to access this area between June 15th and October 15th. The permits will be available from recreation.gov and will go on sale in early April. A Northwest Forest Pass is also required to park at this trailhead.

Dogs: Must be leashed from July 15th through September 15th.

Open Season: The Cascades Lake Highway usually opens around Memorial Day. Expect snow on the mountain to some degree well into August

Bugs: Mosquitos can be bad during the melt season, usually July through early August and primarily in the valley leading up to the mountain, then will mostly clear up moving through August.

Hazards: Don't be stupid. You're climbing a mountain. This is a very long hike with a ton of elevation gain on loose, crappy rock in an environemnt where the weather can change from 70 and sunny to a blizzard within an hour. Be prepared and know your limits.

Heading up the headwall at the end of the canyon before reaching the pumice plains.
3 / 19

Hiking across the plains towards South Sister
4 / 19 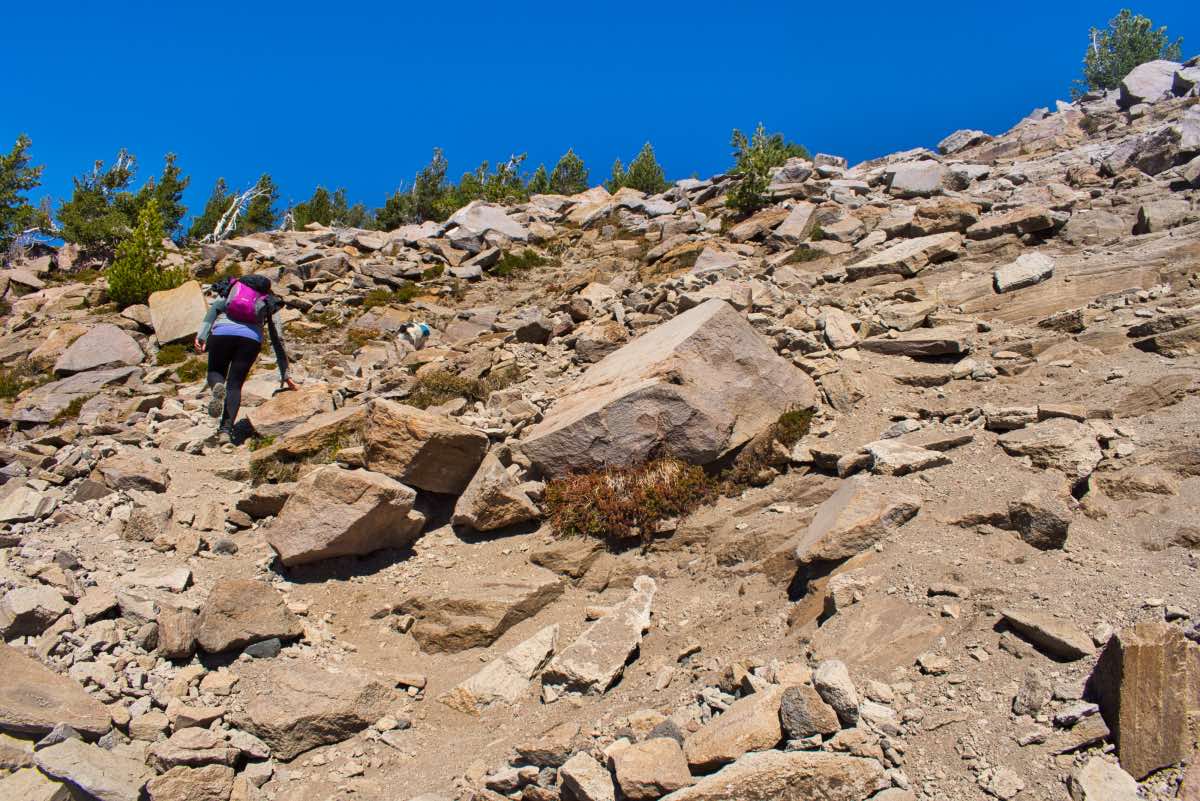 Making your way through the rubble and boulders as you head up the Lewis Glacier moraine.
9 / 19

The view from the third highest peak in Oregon is breathtaking.
16 / 19 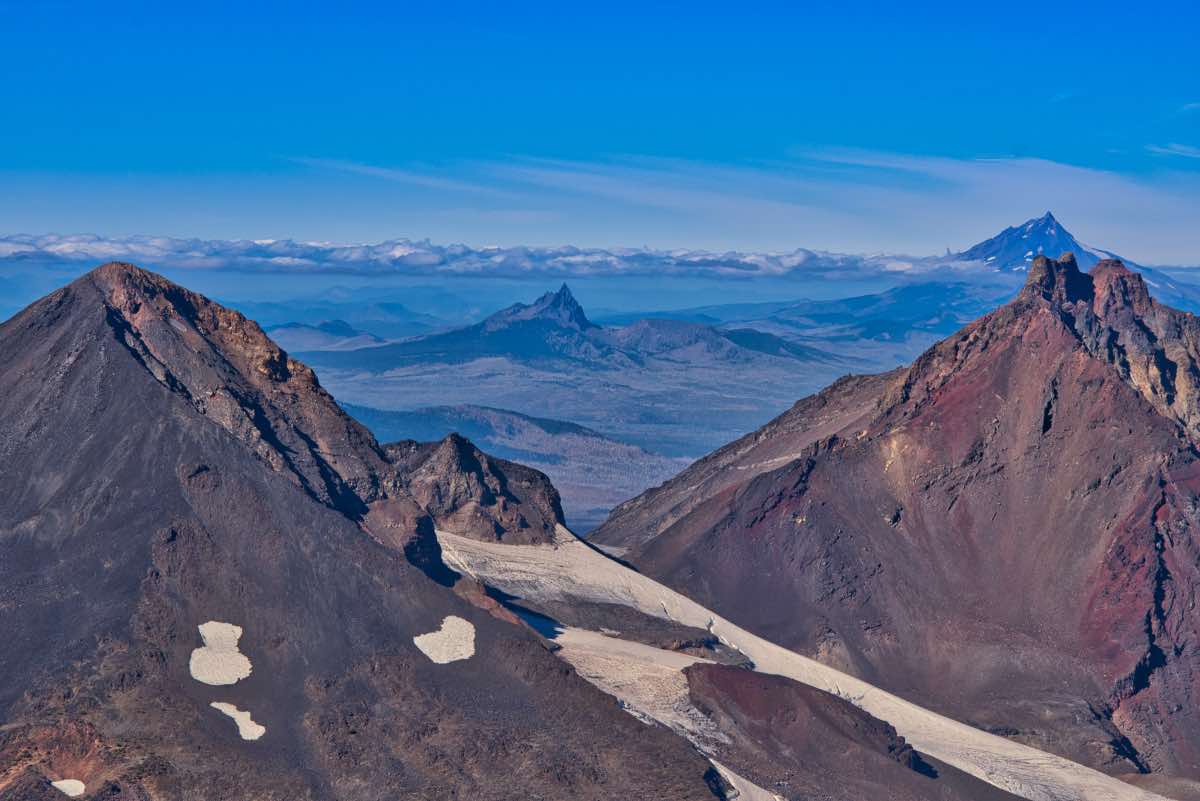